ABSTRACT
Harmony among the teeth, lips, and facial components is the goal of prosthodontic treatment, whether performed by conventional or digital workflow methods. This clinical report describes a
facial approach to planning computer-guided surgery and immediate computer-aided designed and computer-aided manufactured (CAD-CAM) interim complete-arch fixed dental prostheses on

The use of digital resources in implant dentistry has improved diagnosis and allowed the establishment of more predictable treatment plans.1 The standardization and quality of these processes have also increased, thereby reducing the number of appointments. Moreover, the digital workflow has been shown to be more efficient than the conventional workflow in terms of cost and time2 and has shown better acceptance by patients.3,4 Virtual planning and performing treatments with computer-aided designed and computer-aided manufactured (CAD-CAM) digital methods have been reported.
5-19 Digital photographs have been used to design the smile from facial references and improved communication between the interdisciplinary team and patient.5 Planning software programs, digitally milled casts,6,7 and virtual articulators8 complement the resources for an evaluation and interpretation of clinical data to help predict patient outcomes and moderate expectations.
New technologies such as intraoral scanners,9-11 digitally produced surgical guides,12-14 and CAD-CAM methods and materials15-19 enable rehabilitative therapies to be performed with greater safety and predictability.

In anterior situations and extensive rehabilitations of complete arches, treatment plans must be guided by the face to obtain esthetic and functional results.20-23 A great challenge in rehabilitating patients with complete or anterior partial edentulism has always been to relate the face to a definitive cast and fabricate wax patterns in harmony with the face. In the digital workflow, the challenge remains the same, only now these facial references need to be transferred to the virtual cast in the
planning software program.
A digital workflow in implant dentistry starts with a session of clinical data collection, intraoral scanning, and cone-beam computed tomographic (CBCT) scans.24 Virtual diagnostic waxing was performed over the standard tessellation language (STL) files of the virtual casts. They were then superimposed on the CBCT Digital Imaging and Communications in Medicine (DICOM) files and guided the virtual planning of implant surgery. The superimposition of various digital files has been proved to be a reliable procedure.25-29 Some authors have reported limitations to this pathway, especially related to esthetic outcomes.30,31 To overcome this limitation, intraoral
photographs overlapped with digital diagnostic impressions for complementary information in virtual tooth arrangements31,32 have been used, but without a facial approach that could guide virtual waxing.
The use of extraoral scanners allows visualization of the facial soft tissues, which, superimposed on the extraoral scans and CBCT data, created the virtual patient; however, the static scans did not express the facial movements.33 Moreover, they reported that up to now, no systems and software allow 4-dimensional
videos to be fused with DICOM and STL files.
In view of this, photographs of the smile may be superimposed on digital casts and could guide virtual waxing in the digital workflow. This clinical report describes a facially generated and cephalometrically guided 3-dimensional (3D) digital design for planning guided implant surgery and immediate CAD-CAM interim complete fixed dental prostheses with a digital workflow. 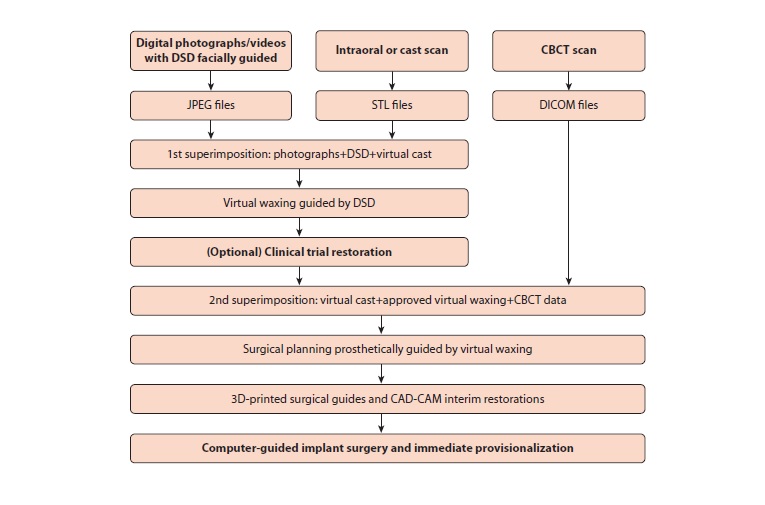 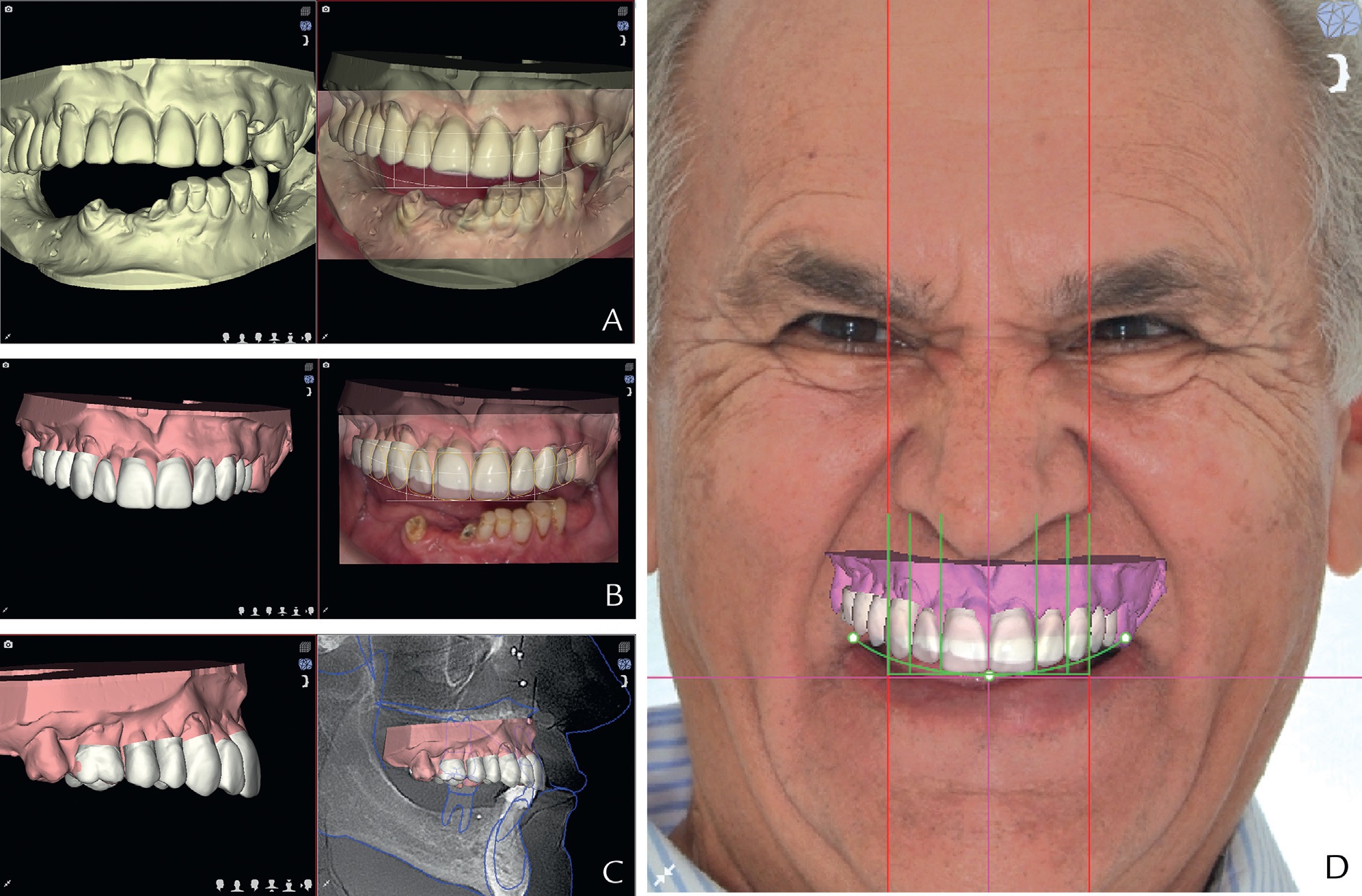 A 73-year-old man sought care at a private dental office for esthetic and functional problems. Anamnesis and clinical examination revealed the absence and structural compromise of various teeth, moderate periodontal problems, and particularly occlusal disorders in the vertical dimension, anterior guidance, and occlusal plane.
Impressions of the arches, interocclusal registration, panoramic radiographs, photographs, videos, and CBCT scan were made to provide data for treatment planning (Fig. 1A-H). The photographs were used for the digital smile design (DSD), guided by the face (Fig. 1I). After consultation with specialists in other disciplines, treatment options were presented.
Despite the acceptable prognosis for some teeth, the patient elected to have his remaining teeth in both arches extracted, followed by the immediate placement of implants
and interim dental prostheses with immediate loading. After this decision, all the digital clinical items of information were uploaded to a software program (NemoDSD; Nemotec). These included Joint Photographic Experts Group (JPEG) files of photographs and screenshots of smartphone videos, STL files of scanned casts, and DICOM files of the CBCT scan. The starting point for the proposed digital workflow was the DSD (Fig. 2), which brought facial references for guiding virtual waxing. Superimposition of the scanned casts with the smile design allowed virtual waxing to be performed, correcting the occlusal imbalances and harmonizing the position of the teeth with face and smile (Fig. 3A, B). A sagittal analysis was also used to generate a cephalometrically guided waxing using the same planning principles as for orthognathic surgery to find the best position and angle of the maxillary central incisor in harmony with the lips and face. Instead of moving the maxilla surgically, the correction of the esthetic position of teeth and soft tissue was done with a denture in a procedure termed the “prosthetic
orthognathic” (Fig. 3C). Facial esthetics, lip dynamics, intermaxillary relationship, vertical dimension, and occlusion were evaluated digitally (Fig. 3D-H). The maxillary digital waxing was exported as an STL file to be printed. A vacuum tray was fabricated for the fabrication of trial restorations (Fig. 4A-C). This clinical step was useful for esthetic evaluation; however, this is not always possible, especially in patients with excessive overeruption or abnormal tooth angulations.
After approval of the trial restorations, the surgical steps were planned. In the same software (NemoDSD), a second superimposition of the files was performed: superimposing the cast with virtual waxing and the CBCT data allowing prosthetically driven planning of the position of implants (Fig. 5). From this planning, 2 surgical guides for each arch were fabricated in a 3D printer (Digital Wax; DWS Systems), and CAD-CAM complete dentures were milled for the maxilla and mandible, all with the sleeves for anchor guide pins in the predetermined position.
The patient received local anesthesia, and the first tooth-supported guide (Fig. 6A) was used only to determine the position of the anchor guide pins so that the second guide for implant placement, already without support of the teeth, and the dental prostheses would have the same positional references given by these pins (Fig. 6B). Six implants (Ar Torq; Conexão) were inserted with 40 Ncm torque (Fig. 6C) immediately after the extractions in the maxilla and mandible.
The interim dental prostheses fabricated from polymethyl
methacrylate by the CAD-CAM method were positioned in the mouth by using the anchor guide pins (Fig. 7A, B). Definitive abutments were tightened to the implants with 20 Ncm torque, and interim titanium cylinders were connected to the prostheses with autopolymerizing acrylic resin (Fig. 7C, D). The tissues were repositioned and sutured, and, after the interim cylinders had been fixed, the anchor guide pins were removed from the bone and their sleeves removed from the dentures. The occlusion was evaluated (Fig. 7E) and clinically adjusted, and a layer of pink composite resin (Gradia; GC America Inc) was added to simulate the color of gingival tissues (Fig. 7F). The immediate dentures were finished, polished, and screw retained with 10 Ncm torque (Fig. 8A, B). The screw access holes were sealed with Teflon tape and composite resin. The patient received postoperative instructions, and weekly evaluations were made for 4 months until the definitive prostheses were fabricated.

Complex rehabilitative situations commonly present unbalanced esthetic and occlusal clinical conditions that represent unreliable references and require correction. Among these situations are those patients with partial edentulism, who may present with indications for extraction of all the teeth. This is a challenging situation because the clinical evaluation of teeth for the new
dental prostheses may be difficult, even impossible. The use of digital resources may be the only way to visualize the future dental arrangement before the extractions are performed. This virtual waxing must be guided by facial references and has to be in harmony with the smile, making a facial approach to planning essential.
The use of photographs and videos combined with scanned casts or intraoral scans and CBCT improves diagnosis and allows the visualization of patient outcomes. They allow the surgical position of implants to be guided by the design of the future prosthesis, as recommended in a recent consensus statement.1 Superimposition of photographs and casts,25 photographs and CBCT,26,27 casts and CBCT,28 and intraoral scanning, extraoral scanning, and CBCT33 have been determined to be reliable procedures.25-29 Future advances will capture the data of the facial skeleton, teeth,
and soft tissues in a single step under dynamic conditions and without the need for superimpositions.29 Meanwhile, the combination of DSD based on the face with intraoral scanning or scanned casts, CBCT, virtual planning of implants, and CAD-CAM of the dental prosthesis with a single software program proved to be useful in the present clinical treatment.
A reduction in the number of appointments and in the clinical cost are the main advantages, while the high cost of the equipment is still a limitation. This, however, can be minimized by partnerships between laboratories and clinics. Another advantage is the global access to this service, since the files are digital and may be sent from any part of the world via the Internet to a laboratory that has this technology. Long-term clinical studies on digital workflow for implant dentistry are, however, still necessary.

SUMMARY
This clinical report described the rehabilitation of the maxilla and mandible with implants and implantsupported dental prostheses with a digital workflow. Multiple digital data were combined in a single software program that allowed virtual planning, guided dental implant surgery, and permitted immediate CAD-CAM interim complete-arch fixed dental prostheses from a facial perspective.